It was a real honour to be asked to capture Cat and Ed’s wedding day in Belmullet in County Mayo, Ireland.
I had previously met Cat when was a bridesmaid at Katherine and Steve’s wedding which I photographed last August.

My day started photographing Cat as she prepared for the day ahead at her parent’s home in Tirrane.

The wedding ceremony took place at St Brendans Church, a lovely bright church with a stunning stained glass window. The ceremony was lovely and included singing from Cat’s sister (and Maid of Honour) Helen. After being congratulated by all their guests the hotel’s drivers took Cat & Ed and the bridal party on a trip around the local area to stop off for some creative photos and group photos of the bridal party. We stopped at some standing stones, an old closed down pub called, Henechans and finally the beach.
The wedding party were superstars as it was blowing a gale by the standing stones and on the beach it was bitterly cold. Thankfully the drivers had brought with them a few thermoses containing hot toddies that the wedding party enjoyed at the beach.

We had a fantastic time on the beach taking group portraits and creative portraits. My favorite shot from the day is the picture of the wedding party walking in a line along the beach. The shot came about when I was trying to take traditional formal group shots on the beach. Between different group photos the sand around the party would get very churned up, as I wanted to keep the photos as clean looking as possible occasionally we moved to a new point on the beach. It was when the group were moving that I realised I had a fantastic opportunity for this more creative group shot.

It was an extremely windy day on the coast so we after which we were all happy to retreat to the warmth of The Broadhaven Bay Hotel in Belmullet for the wedding reception. On arriving at the wedding venue Cat and Ed were greeted by the manager and welcomed into their party by a confetti cannon as the manager raised his glass to toast the couple.

The dining room was beautifully decorated for the wedding breakfast, the room was lit up with lots of candles and starlight backdrops and the couple had used London Underground station names as their table names.

Cat and Ed had their first dance to ‘Earth Angel’ by Marvin Berry and The Starlighters.

Andy did a great job on our wedding photography and provided us with some amazing images to cherish from the day. He was not at all intrusive but had lots of ideas and suggestions for some unique photos as well as capturing natural moments of the day. He went above and beyond in researching an area and location he had never been to before. Andy also helped us with creating and selecting photos for our wedding album. We would highly recommend Andy as a wedding photographer. 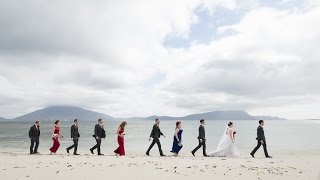 More from the blog...

Natalie and Craig’s destination wedding at Masia Ribas just outside of Barcelona.

Schedule a Zoom or WhatsApp Chat

Do NOT follow this link or you will be banned from the site!