Suzy and Matt had a tipi wedding at Lakeside one of Tip Top Venues near Milton Keynes.

My coverage of the day began with groom prep as I photographed Matt for 10-15 minutes as he got ready with his son and his best man in his house in Mentmore. I then head to Cheddington to photograph Suzy as she had her makeup done by the fantastic Kelly Marie Prescott. It was a very stormy day with gusts of wind up to 50mph. During bridal prep, Suzy received a call from the venue informing her that unfortunately, the ceremony space was to exposed to the elements and that the tipi was not safe for guests in such high winds. So the staff at Tip Top Venues were putting contingency plans in place. Both Suzy and Matt took the news very well and the day continued with a new mystery element as Suzy and Matt had no idea how their wedding day would unfold, however they knew they still wanted an outdoor wedding if possible.

On arrival at Tip Top Venues, guests were welcomed into the landowner’s house and were served drinks in the conservatory. The new plan was to have an outdoor ceremony in an area of the garden which was sheltered by large trees. There was a break in the rain so everyone head outside for the ceremony. Suzy and her father walked down the aisle with the wind blowing Suzy’s hair everywhere but she continued to have a beaming smile. It was the most tricky ceremony I’ve ever had to photograph with the wind blowing my camera side to side and everyone looking quite windswept! However, it was a lovely ceremony to be a part of and one that will be very memorable!

At the end of the ceremony, everyone made their way back into the conservatory for drinks and canapes, just as we did there was a brief downpour. During the reception, I took a few group shots of the bride and groom in the garden with their family in the most sheltered spot that I could find.

The wind began to die down into the afternoon, so the wedding party was moved into the tipi. Guests were shuttled down to the tipi site in a 4×4 lorry which looked like great fun!

The inside of the tipis looked great, they were set up with banqueting tables and had wildflower centrepieces and engraved wooden name place settings. Speeches were given by the father of the bride, bride, maid of honour and best man and then everyone enjoyed a BBQ lunch. During the meal, I braved the wind and ventured outside to take some shots of the tipi from the other side of the lake.

After the meal, the wind had eased a little more so it was now or never to have a wander with the bride and groom to take some portraits. Suzy and Matt were fantastic and we captured some lovely couple photos before heading back into the tipis for the first dance.

View a selection of the windswept wedding photos below. 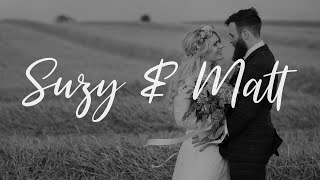 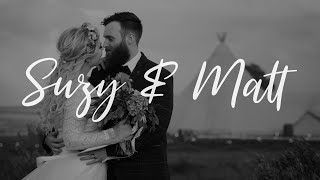 Charlotte and Carlo's wedding at Corpus Christi Church followed by their Tipi wedding reception at the Natural History Museum in Tring.
READ MORE