Sally and Riccardo had a Notley Abbey wedding on a very wet day in July. Notley Abbey is a luxury country house wedding venue on the Buckinghamshire and Oxfordshire border.

My coverage of the day started with bride prep in the Notley Abbey bridal suite. Sally was doing her own makeup and was joined by her two bridesmaids. Riccardo was also getting ready at the venue, so I was also able to capture a little bit of groom prep.

The ceremony took place in The Abbot’s Hall which was beautifully decorated with large floral urns.

After the wedding breakfast, there was a break in the rain so I took Sally and Riccardo out for a walk around the grounds for some portraits. One of my favourite features of Notley Abbey is the long, beautiful, tree-lined driveway. We took portraits along the driveway and at the front of the house.

The evening reception kicked off with a short speech given by Riccardo and was followed by Sally performing a song and the cutting of the cake.

Many congratulations to Sally and Riccardo!

If you would like to see a few more photos of Sally and Riccardi you can view photos from their engagement shoot in Aylesbury. 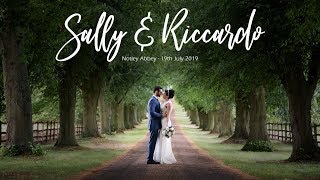 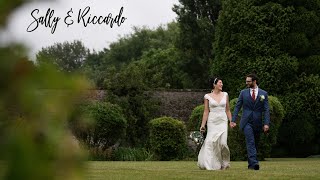