Below is a selection of photos from Kerri and James’ Missenden Abbey wedding which was in early September.

My coverage of the wedding started with Kerri in the bridal suite as I photographed her having her bridal makeup done. In the morning I took lots of detail shots of Kerri’s bouquet, shoes and perfume on an antique chest. Kerri looked stunning!

The ceremony was held in The Garden Room which is perfect for an intimate wedding. It was a lovely wedding ceremony which was filled with nervous laughter from both Kerri and James. After the ceremony everyone head outside for a confetti shot. I love the reactions that I captured as Kerri and James were bombarded with lots of confetti.

During the reception, I took group shots of Kerri and James’s family, bridesmaids and groomsmen. I then walked around the gardens with the newlyweds taking portraits around the garden. The light was perfect and golden which was great for lovely photos of the couple.

The highlight of the day for me was James’ brothers, best man speech, it was hilarious! The speech revolved around James’ work life at Robert Dyas where James’ performs product demonstrations on video and has featured in a rather bizarre viral Christmas advert from a few years ago. The speech ended with James being challenged to demonstrate a pair of garden shears by cutting a baguette in half. This was not a typical speech! 🙂

It was a great fun wedding to be part of, the evening saw a packed dance floor with guests dancing away.

Congratulations to Kerri and James! 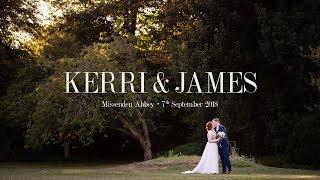 A slideshow of wedding photography from Kerri and James' wedding at Missenden Abbey. in Buckinghamshire.

A selection of photos from Kerri and James' engagement pre-wedding shoot at Missenden Abbey in Buckinghamshire.
READ MORE

Abi and Jonny’s wedding at Saint James the Great Church in Bierton followed by their wedding reception at Creslow Manor in Aylesbury, Buckinghamshire.
READ MORE

Schedule a Consultation on Zoom
Do NOT follow this link or you will be banned from the site!