I had been looking forward to Claire & Tom’s wedding as it was my first time photographing a wedding at Halton House and had been on my venue wish list since moving to Buckinghamshire. Halton House is a stunning Rothschild country house in the Chiltern Hills in Buckinghamshire. It is currently used as the main officers’ mess for RAF Halton. It is a stunning wedding venue that has featured as a location in many films and tv programs including The Kings Speech, The World is Not Enough, Downton Abbey and The Crown.

My coverage of Claire and Tom’s wedding day began with Claire at Halton House, photographing as she had her hair and makeup done. Claire was joined by her Mum and sister and was later joined by her Dad who accompanied her to the church a 1955 Austin Princess Limousine.  Halton House has a magnificent staircase so I made sure to capture a photo of Claire and her Dad walking down it as they made their way down it on the way to the car.

The Church service was at St Mary’s in Wendover. Claire and Tom’s nephews began the wedding procession one walking down the other being carried holding signs “Uncle Tom, Here comes Auntie Claire” and “Don’t worry ladies we’re still single!”. The service was lovely and very relaxed. The priest presented Claire and Tom with a bottle of bubbly and a pair of glasses so that the could have a celebratory drink during the ceremony which was a unique touch.

On leaving the church Tom’s RAF colleagues formed a guard of honour raising their swords forming an archway for the newlyweds to walk under. Unfortunately, it was a wet rainy day so the bride and groom head straight into their wedding car for the short drive to their Halton House wedding reception.

On arriving at Halton House for the wedding reception, I started taking group portraits of the couple with their family, friends on the staircase.

As it was such a wet and windy day, it didn’t look as though there would be much opportunity to take the couple outside so we took some portraits around the house making good use of the balconies and chandeliers to capture some romantic wedding photos.

Wedding guests dined in the central hall, which is a stunning room for wedding breakfast with its high ceiling, ornate walls and glass dome.

At the end of the meal, there was a brief dry spell so I grabbed the newlyweds and we head outside for a few photos in the grounds using Halton House as the background. It was very windy and cold so we didn’t stay out long but I’m so glad we found an opportunity for some portraits outside.

Claire and Tom had chosen “Die A Happy Man” by Thomas Rhett as their first dance song and then Claire had a Father-Daughter dance with her dad before everyone else joined the dancefloor and were entertained by The Fat Cats band.

As it was such a wet and windy day we hadn’t had an opportunity to throw any confetti outside as planned. So I suggested to the couple that during the bands break between sets that we assembled all their guests on the dance floor for a confetti shot. I’m so glad I did as it was a lovely way to end my coverage of their wedding day. 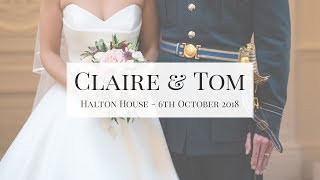 We couldn’t recommend Andy highly enough. Right from our pre-wedding shoot, where he put us at such ease, we were so happy and comfortable knowing what to expect from Andy on our wedding day.

He worked so hard on the day, capturing every moment we could have hoped for. He worked with the weather (the rain) and suggested an alternative way for us to still capture our confetti shot, a moment I’m so happy we still got to have, because of him.

We have just received our beautiful wedding album, which is something we’ll treasure forever.

Thank you, Andy, for all of your hard work on the day, and right up until you delivered our photos. We couldn’t be happier.

Sarah and Daniel celebrated their wedding at Tylney Hall in Hook following their church ceremony in Hartley Wintney.
READ MORE

Congratulations to Kerri and James who tied the knot at Missenden Abbey in early September.
READ MORE

Abi and Jonny’s wedding at Saint James the Great Church in Bierton followed by their wedding reception at Creslow Manor in Aylesbury, Buckinghamshire.
READ MORE